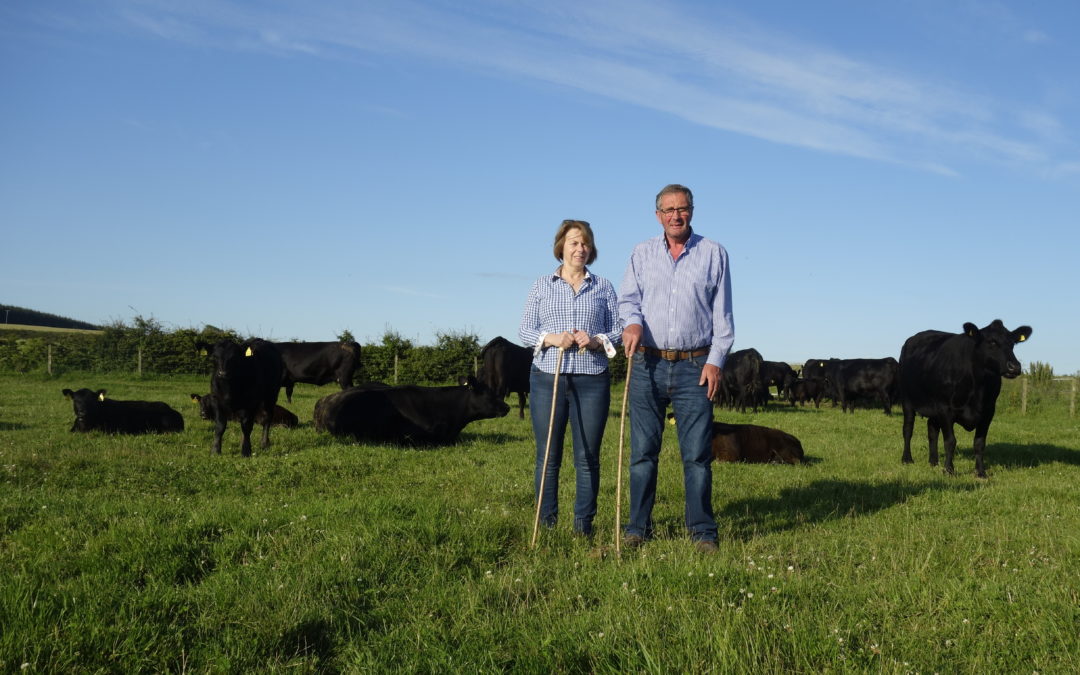 Nestled along the riverbank of the River Deveron at Denhead of Dunlugas , Hamish and Margaret Sclater established their renowned Deveron Aberdeen Angus herd in 1995; it was the same year that the couple first began exhibiting at the Turriff Show.  Hamish proudly says that they have never missed a show since.

“Every exhibitor in the North East wants to win at Turriff,” says Hamish.

“The show is in the heart of North East Scotland, from where the Aberdeen Angus breed originates and there has always been the highest standard of stock to compete against.

To establish their herd Hamish and Margaret bought in several bloodlines and, one of the first animals they took along to the show in 1995 was a yearling heifer from the Lady family and the couple still have a strong bloodline from the family in their herd today.

Farming a total of 400 acres, the Sclaters grow 150-200 acres of malting barley each year and overwinter 500-600 lambs for an estate in Tomintoul.

“Seventy-five cows were put to the bull this year, with the idea of selling some of the females. Over the years we have sold stock to new breeders with many of our bloodlines making the foundations of new herds. It’s great to have new and old customers continuing to support the us,” says Margaret.

Hamish adds; “Showing calves is a real passion of ours and Turriff Show gives us an idea of how things might go later in the year at calf shows and bull sales. If we do well at Turriff, quite often those animals will continue to do well in the show and sale ring for the rest of the year.”

And success is something that Hamish and Margaret have had plenty of, winning 22 championships at the Black Beauty Bonanza (Aberdeen Angus Young stock Show attracting approx. 100 – 120 entries) to date and numerous ‘tickets’ at society bull sales, including Intermediate Champion at Stirling in February of this year.

“We have had many highlights in the last 23 years but a special moment for us was when we won four out of the five championships at the Black Beauty Bonanza – the only class we didn’t win was one that we didn’t have an entry in for,” comments Hamish.

“We have had our fair share of success at Turriff too, at the most recent championship in 2017 we won with Deveron Memphis Boy,” adds Margaret.

“The youngstock within our herd are the future and they give us opportunities within the business, whether it’s selling stock on to other breeders or retaining them in the herd.

Although both our children have moved away from farming, I feel very passionate about giving young people a chance, helping them to develop and grow, not only within the Aberdeen Angus breed but also in the wider industry,” says Hamish.

The couple have a Limited Duration Tenancy (LDT) that ends in 2027, so they admit that, with neither of their children wanting to take on the farm, they’re looking to the future beyond the farm and are already planning things to do in their retirement.

However, for now, nothing’s winding down at Denhead and the team are looking forward to exhibiting for their 24th year at Turriff, with two entries in the Aberdeen Angus Cattle section.

“We are really looking forward to exhibiting at the show once again. For us it’s not just about showing the cattle, the show gives our industry the opportunity to showcase the vast array of food that is produced in this area. It’s best to buy local, not only to reduce food miles, but so that you know exactly what you are eating and, in today’s society, our agricultural shows have an important role in promoting this,” comments Margaret.

She continues; “Turriff Show always has a busy ringside of spectators and it gives exhibitors the want and desire to put on the best show of stock for visitors to see. It’s clear to see that the show has a good reputation by the number of people who congregate around the ringside,” she concludes.